You are here: Home1 / News Archives2 / News3 / Wild Horses At Risk In Proposed Predator-Prey Reduction In The Chilcot... 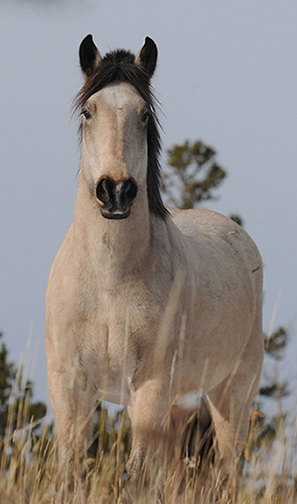 Not your average mustangs — dominant Spanish Barb blood has given the wild horses of the Chilcotin their unusual strength and beauty. They are national treasures.

The horse evolved in North America but apparently went extinct after the last Ice Age. They were brought back to the Americas by the Spaniards in the early 1500s, and some horse scientists and evolutionary biologists consider today’s wild horses a returned native species, not alien. Fossil remains of an earlier species of horse have even been discovered in the BC interior. They have been wild in the Chilcotin since about 1750. Genetic studies sponsored in part by VWS have determined that the wild horses north of the Chilko-Chilcotin River carry the dominant bloodlines of Spanish Barb horses brought to the Chilcotin by aboriginal peoples.

The caribou of the west Chilcotin belong to the Northern Group of Mountain Caribou. Their recent rate of decline is frightful. The Itcha-Ilgachuz herd had 2,000 animals in 2002. By 2016 there were only 841 animals. The amount and kind of habitat disturbance or protection, winter recreation closures, and hunting mortalities should be considered before we blame wolves and cougars.

The federal government’s 2014 Recovery Strategy cited as threats to the Itcha-Ilgachuz herd: “expected expansion of roads due to logging and mountain pine beetle salvage logging” and snowmobiling, saying “Increased levels of use are expected with an increased level of access created by industrial development, particularly mountain pine beetle salvage harvesting.” There is licensed hunting of the Itcha-Ilgachuz herd, as well as a likely significant First Nations hunt. The recent leaked government document offered no information on existence of these activities or their impacts on the caribou populations, yet the proposed predator-prey culls threaten a wide swathe of killing wildlife across the Chilcotin.