You are here: Home / Projects / Endangered Western Toads in the West Kootenay 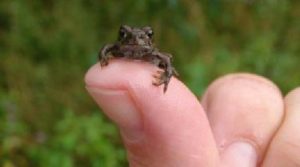 Toadlet, small enough to fit on the tip of a thumb. Barb Houston photo.

Western toads (Anaxyrus boreas) are provincially yellow-listed by the BC Conservation Data Centre and federally listed as a Special Concern by the Committee on the Status of Endangered Wildlife in Canada (COSEWIC). They have disappeared from much of their historic range in the United States. British Columbia’s West Kootenay region still has a significant western toad population that is now under threat from excessive highway mortality, clearcut logging, climate change and other factors. Toads have three annual migrations, making conservation efforts particularly challenging. One of the worst threats is direct mortality as breeding adults and juveniles (toadlets) attempt to cross busy highways that slice through their habitat. In 2015, VWS biologists began a five-year study at Fish/Bear lakes located in a remote mountain pass between New Denver and Kaslo in the Selkirk Mountains to get more information on this area’s breeding population of toads and identify “hotspot” areas along Highway 31A where large numbers of migrating toads were being killed. Our overall goal is to enhance the survivability of both adult toads and toadlets of the Fish Lake population that is likely of regional significance. VWS also has an ongoing public education campaign to enlist help from local citizens and visitors in this conservation effort, including a Toad Ambassadors volunteer program and an interpretive sign at the Fish Lake Rest Area. For more info about our work, check out our fact sheet and the video below.

In a remote area located in a high mountain pass between Kaslo and New Denver in the Selkirk Mountains of British Columbia, endangered western toads are getting some assistance from the Valhalla Wilderness Society (VWS). Toad Angels captures how researchers are helping migrating toads safely cross the asphalt gauntlet of Highway 31A that separates the toads’ upland forest habitat and breeding areas at Fish Lake. According to VWS research biologist Marcy Mahr: “This population of western toads attracted our attention because although remote, the highway is very popular for summer tourists traveling at the exact time of year that thousands of adults and tens of thousands of baby toadlets are trying to cross the highway during their migration cycles. And, because toads require both upland and shallow lake habitats, a highway running through them can result in a lot of dead toads on the road.” Check out how these biologists are developing solutions and are true toad angels.