You are here: Home1 / Projects2 / Provincial Parks in Peril 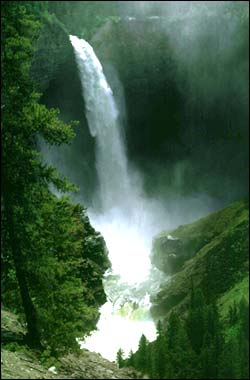 British Columbia’s provincial parks have, over the years, become part of the very identity of the province and its citizens.

User fees. Commercialization. Private Control. Major changes are in the works to ensure that profit-making, not ecological integrity, is top priority in the management of our provincial parks.

Since the designation of Strathcona Park in 1911, the park system has grown steadily, both in size and significance. Parks provide protection for ecosystems, and a haven for humans from the kinds of industrial and commercial development that have scarred much of the land-base outside of parks. They have also been a source of substantial revenue generation for the provincial economy — the equivalent, according to the government’s own reports, of a significant export industry. For more detail, read the Economic Benefits of Provincial Parks Report

This year, the provincial government launched a massive push towards the privatization and commercialization of B.C.’s parks. Proposed changes include long-term private leases in parks, public-private partnerships, commercial development such as restaurants, concessions, and accommodation facilities within park boundaries, and new and increased user fees for anything from parking, to hiking, to picnicking. The commercial development and increasing private control planned for parks would spell disaster for ecological integrity.

The B.C. Park Act currently forbids commercial development within parks, but inside sources have informed VWS that this legislation is currently being reworked to fit the new agenda – a frightening prospect for anyone who cares about parks.

While the government continuously tells us it is not selling the land-base of parks, therefore it is not “privatizing” parks, the changes it is pursuing represent the same thing – the concentration of control over parks in the hands of the private sector. While it is true that small contractors have been operating some campgrounds for a number of years, it is far from true that the changes the government is now implementing represent simply more of the same. Businesses have never before been asked what kinds of user fees they would like to charge in parks, and for what kinds of services. They have never before been openly encouraged to invest in park infrastructure, nor encouraged to form business groups and submit large-scale bids for contracts, nor offered an opportunity to “self-monitor.”

Equally ominous, there is a blurring of jurisdictional lines with regard to parks. The old Parks Branch has been dismantled and the government is declaring that various agencies will “work together” on how parks should be managed. Some parks are even being transferred to the regional district, which completely trashes years of public process in which it was decided that these parks should be a provincial trust, managed for all the people of B.C., with the highest level of protection, by the highest level of government.

Whenever parks have been threatened in the past, the public has rallied together to let the government know, in no uncertain terms, that our parks are not there for the private profit of a few, but represent something larger and much greater than that. Currently, our parks are under threat as never before.

Over 60 organizations have signed on to a “Declaration on the Principles of Parks,” that define criteria for maintaining parks as enduring public legacies. These organizations, representing tens of thousands of British Columbians, are asking that there be no commercialization or private control of parks, and that parks be properly funded and maintained by the government.

The public input phase of the Valhalla Park Master Plan Process ended in the winter of 2005. Only after the process ended did the public learn that three areas in the park had been identified as potential candidates for luxury lodges in the BC Parks Lodge Strategy. (See BC Parks Lodge Strategy documents (PDFs) under Provincial Parks in Peril, below.) BC Parks just released the “Summary of Public Input.” The government committed to strengthen the draft plan to protect against adverse effects due to lodges.

Mt. Assiniboine currently has a lodge within the park. It has been identified for a new lodge in the PARKS LODGE STRATEGY. (See BC Parks Lodge Strategy documents (PDFs) under Provincial Parks in Peril, below.) A new Master Plan process is starting now and ending March 31, 2006. Suggestions for issues for discussion due by November 30, 2005. Key stakeholders workshop on January 7th, 2006 in Radium (location to be determined). Public Open House in Radium on February 15th.

Declaration on the Principles of Parks

Signed by 85 Canadian and US Environmental Groups – Sign your organization or business up now.

At the turn of the previous century, amidst the rapid development of land, trapping and shooting of wildlife and cutting down of forests, there emerged a vision of preserving large areas of wildlands in their natural condition, with little or no modification by humans. This declaration concerns all such wildland protected areas, which are referred to herein as “parks” or “protected areas.”