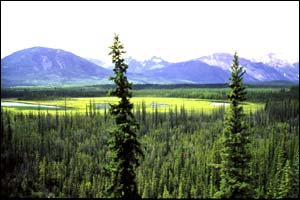 Almost half of Canada’s 9.9 million square kilometre land area is covered by forest, making up 9% of the world’s forests. Much of this forested land is boreal, adapted to cold northern temperatures and rich in biodiversity. Stretching across all the provinces of Canada – and in a belt across the northern hemisphere – the boreal is the world’s largest forest ecosystem. 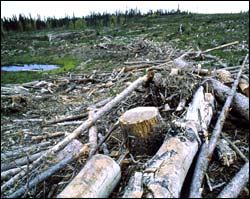 Forest ecologist Dr. Stan Rowe says that “the boreal may become known as North America’s last abundant forest and the lungs of the nation. These trees breathe in carbon dioxide and breathe out oxygen.” Scientific evidence also shows that global warming will be increased through deforestation.

As well as being home to species such as grizzlies, moose, black bears, and caribou, the boreal is the critical summer home of tens of thousands of birds, whose migratory paths bring them up from the tropical forest of central and South America. Today, birds are declining as never before, and more than 1,000 species are in danger of extinction. The International Council of Bird Preservation has identified the key problem as habitat loss – primarily of forests and wetlands both in the boreal and tropical forests.

Clearcut logging and oil and gas developments are devastating for native communities that have, until recently, lived in very remote areas and are dependent on the forest to survive. Transnational corporations continue to reap profits in the billions of dollars from the trees of Canada’s boreal, yet very few indigenous people have even been given jobs in the timber industry.
Through the work of Colleen McCrory, the Valhalla Wilderness Society has been the mainstay of support for the Boreal Forest Network (BFN), the Canadian affiliate of the worldwide Taiga Rescue Network.

The BFN has been set up to assist and support grassroots environmental groups and First Nations working on boreal forest issues. For the past five years, the Valhalla Wilderness Society has provided funding as well as outreach and research in the various provinces.