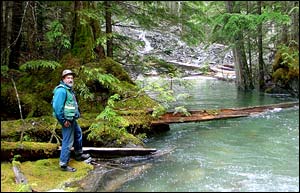 VWS Director Craig Pettitt is increasingly known for his field investigations of logging practices and his workshops to teach local residents how to do their own monitoring. His work, which is sponsored by VWS, puts pressure on logging companies to improve their practices.

Craig is the VWS coordinator of Forest Watch, where he has documented numerous violations of the Forest Practices Code. In 1999, for example, he discovered a 2-kilometre long landslide from a clearcut into Slewiskin Creek, a fish-bearing stream near the Slocan Valley. A Ministry of Forests (MOF) report called the landslide “unavoidable bad luck.” Craig said it was a Code violation. Slocan Forest Products had illegally felled a log across a stream and left it there. It diverted water, which started the slide. The stream and its fish were seriously damaged.

MOF denied there was a violation. Craig called in the federal Department of Fisheries and Oceans (DFO). Although DFO did nothing, the attention embarrassed the local Ministry of Forests office (Arrow District) into making its own investigation. The result was a $19,864 fine. The fine just covered the cost of repairing the damaged logging road, paid for by the taxpayers through MOF. The Sierra Legal Defence Fund filed a complaint with the Forest Practices Board on Pettitt’s behalf. The Board convened an investigative panel composed of Ministry of Forests staff. They failed to censure the Arrow District. They did, however, return the decision to the Arrow District Manager for reconsideration. The DM increased the fine to $38,000. It took until September of 2001 to bring this incident to resolution.

Craig has been of service to residents of the Slocan Valley, the Kootenay Lake area, Creston, and other areas that are trying to defend their drinking water from logging. His work increasingly takes him to other parts of the province, where he does such projects as documenting beetle infestations on the ground, investigating landslides and reviewing MOF logging plans for spotted owl protection. His work has grown to include the identification of areas of antique forest within the Inland Rainforest and the significance of these areas to the threatened mountain caribou.