What Is an Environmental Warrior? Reflections on Colleen’s Life

You are here: Home1 / What Is an Environmental Warrior? Reflections on Colleen’s Life 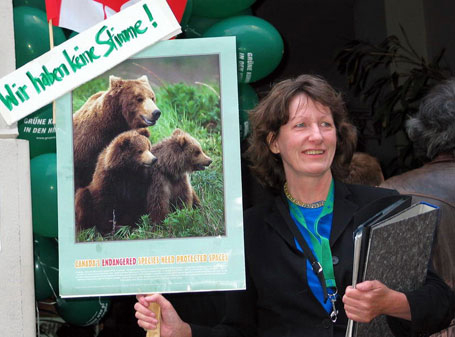 “The way she saw the bush, the way she felt passionate about it, the way she wanted to protect it, it came from a truly authentic place and so there was no artifice about her, she didn’t put on any airs for anybody, but she was all passion all the time.

It has been almost a month since Colleen left us. For those of us at the Valhalla Wilderness Society, along with the grief there was the extraordinary experience of how many people reached out to touch our grief and pain, our memories, with theirs — either through an e-mail, a telephone call, a card or a few words and an embrace on the street. It was so utterly moving, there were times I felt surrounded by hundreds of angels — the angels that are deep inside so many people, and only reveal themselves in times of great crisis. Believe me, it made a difference in how we were able to make it through this.

Many of the messages that people sent had much relevance for the people who must carry on in the environmental movement today. For instance, to be called a “Warrior” by a representative of the Gitxsan First Nation is a great tribute to Colleen McCrory, and one that has been corroborated by many diverse people who knew her, such as Delores Broten (owner and editor of the Watershed Sentinel) and David Suzuki. But what is a “warrior” in the context of this day and age, and in a movement dedicated to peace and reverence towards all life?

The qualities that earned her that reputation have been cited over and over again in the outpouring of remembrance, sadness and grief that has followed her death. Many people have said to her family and friends (usually with voices cracked with tears) “She inspired me.” Much of this outpouring is touched with the sense that she was a rare beacon of encouragement and hope that has now gone out; and many say it was because of her capacity for action in the defense of many living things that are helpless to defend themselves.

This warrior quality is not about winning, it is not about gender or physical prowess on the battlefield. It is a matter of the spirit. The chief battle that has to be fought to earn this reputation is a battle one must fight inside oneself with the forces of apathy, egoism, defeatism, discouragement, fear, selfishness and mediocrity. There are few who have fought and won this battle, but the opportunity to do so is as prevalent today as it was centuries ago.

No one can succeed in changing this world without unifying a large number of people behind positions of strength. How often there exists a massive number of people who are ready to do this. However, in any movement there are always “middlemen” and “leaders” who are not warriors. Many will mint a barrage of excuses for not taking action. Many will set up roadblocks to obstruct any threat to their comfort. To rally collective action, a person like Colleen would have to inspire or persuade some of those people, or else fight her way free of them to undertake the strengthful action she knew was necessary

Thus, it is no surprise that some of Colleen’s detractors were in the environmental movement. To them, she wasn’t a warrior but a self-righteous extremist. The warrior ideal is the polar opposite of what so many environmentalists today idolize as the “win-win” bargain with the destroyers of our environmental integrity. They have always said that society wants win-win agreements; that it wants “peace in the woods;” that it wants to remain comfortable, undisturbed by news of betrayals, outrages and dangers. It was such news that Colleen so often brought, crashing our collective sense of security, demanding that we take some kind of uncomfortable action.

Colleen was not by any means the only warrior in our movement. If it is true that she suffered much mischaracterization and disheartening marginalization for the strong stands she took on principles, we may be sure that many other existing and potential warriors have faced similar adversity and still face it today. Any of us knowledgeable in the movement could cite innumerable instances of it.

With the songs of Colleen’s praises still in the air, might we not begin to consider whether there is, in the majority of people, a longing for the emergence of warriors who will truly confront crimes against the environment? After all, even before Colleen died there were indications that the majority of the public is well ahead of some of the “leaders” of our environmental movement in feeling that not enough is being done to protect the environment. The fact that even Premier Campbell issued a thoughtful and apt tribute to Colleen is a staggering refutation of all those who thought of her as an extremist.

Any discussion of Colleen will have to deal with that many-sided and often deceptive word, “leader”. Colleen was a leader in the sense that she was so often out front saying and doing bold things. I can’t say that she was a leader in the sense that the movement followed her advice or supported her positions en masse. However, judging by the number of people in the environmental movement who have told us they were inspired by Colleen, she may have lifted many people to do more and to be stronger.

But it was to the many people who have no opportunity, capacity or calling to do environmental work, but who fervently want it to be done, and who do their part by giving aid and heart to those who are doing it, that Colleen truly stood out as a champion. She was inherently the representative of such people. She always treated it as a great privilege, because she had tremendous respect for the public mind, the public heart, the public’s rights.

Colleen’s activism was accompanied by a tremendous respect for the principles of government and for the democratic process. She worked in elections from the time she was 18 years old. At one time she worked very hard to bring in the NDP, and she worked much harder to bring in the Green Party. If Colleen were here today, she would still be throwing every ounce of her native optimism into encouraging people to have faith in the principles of government. She would be telling us that too many people fail to take action within the political system, and that’s why it is failing us. It was because of her deep feeling for the principles of government that she was so quick to sense betrayals of the public trust. She knew what the public had a right to expect. She had no hesitation to demand it, to confront politicians in public and expose the most shameful truths. Yet there was always this innate respect underlying her tone and language. That is why a number of politicians whom she confronted have expressed considerable respect for her.

One example will illustrate the contradiction between the negative views of Colleen and the reality. In 2000, when she was preparing to run for the Green Party candidacy in the Nelson-Creston Riding, there were accusations that Colleen would sink the Green Party because she was too extreme, people didn’t like her, and she would drive them away in droves.

Eventually, Green Party member and environmental activist Tom Prior accompanied Colleen when, as the Green Party candidate, she went out on the streets to meet people. “It was just amazing,” he recalled in an interview with the Ecocentric radio station. “Colleen loved people and they could feel it. We didn’t have to work hard to meet people, they were coming up to her, and of course the number of votes for the Green Party just skyrocketed.”

And so, amongst many impressions of Colleen that were false, we have two portraits that were true. We have a warrior who fought many battles, and a person who had a great tenderness towards trees and animals; a person whose presence amongst everyday people was so unifying, affirmative, and wreathed in laughter, compassion and other human responses. We have also a person who constantly repudiated government policies but who respected the ideals of government; a person who was so representative of the voice of many people that she had no problem at all crossing the line into politics.

What was it that connected the two sides of Colleen? What but that the fierceness of her battles had love as its secret source? — love for the undefended, for the people, animals and trees trampled in the name of resource exploitation; and for the principles of service to the public interest that made her a fierce enemy of those who betrayed them?

The truth is that Colleen never led nor wanted to be a leader. She served — served her ideals and principles, put the welfare of many trees, forests, animals and people above her own. As a result, the intent and ultimate achievements of her battles were positive and won her many friends, no matter the mistakes, deficiencies or the Irish stubbornness and temper that sometimes went along with it.

Wouldn’t it be rewarding if, as the result of Colleen’s death, the environmental movement would put its energetic actions into giving needed dimension to words such as “warrior”, “confrontation” and “activist”, coming out of this tragedy with the greater strength so urgently needed in these desperate times?