The Battle To Stop The Assault On Endangered Mountain Caribou

You are here: Home1 / News Archives2 / News3 / The Battle To Stop The Assault On Endangered Mountain Caribou 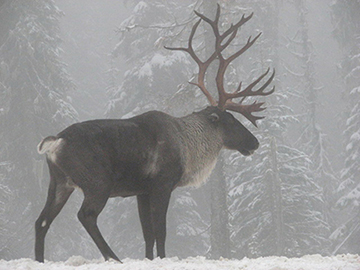 This photo symbolizes a natural inheritance disappearing before our eyes — a bull of the South Selkirk herd that is now gone forever. Photo by Steve Forrest.

Thousands of scientists are warning: loss of biodiversity and climate change threaten the future survival of humanity. The disappearance of Mountain Caribou is part of both of these crises. Protecting them is British Columbia’s responsibility to the world.

Mountain Caribou exist nowhere else in the world but in eastern British Columbia and a small part of Alberta. Their survival depends on old-growth forest. They are disappearing because too much forest has been destroyed and fragmented by logging, and by oil and gas exploration and development. Scientists also say that saving old-growth forest is critical for mitigating climate change. And we  know that the oil, tar sands and fracking industries are worsening climate change. So it turns out that by protecting the habitat of the Mountain Caribou, we are helping to protect ourselves and the rest of humanity. Old-growth forest harbours many other species. There are at least 40 known species at risk in forests used by Mountain Caribou in the Interior Wetbelt alone. The loss of Mountain Caribou herds is a symptom, not the disease. The disease is rampant corporate exploitation of natural resources, and it is annihilating whole swathes of species. This is why many scientists are urgently warning humanity to protect 30-50% of the planet. Caribou issues are also wolf, cougar, bear, moose, deer and elk issues. The BC government slaughters predators, and sometimes their main prey, in the hopes of increasing caribou; but this only covers up the harm done to caribou — in loss of food, stress, and inability to cope with weather and snowpack conditions — until it is too late to do much about it. Large carnivores are not only important parts of biodiversity themselves, but their reduction or elimination of predators is devastating to ecosystems. Can we really save the Mountain Caribou? No one knows. But by protecting old-growth forest, and by protecting the animals from snowmobiles and heli-skiing, we can give them their best chance to survive; and by doing so we can save much more. This is why VWS has three park proposals to protect remaining intact Inland Temperate Rainforest-Mountain Caribou ecosystems. More posts below: Central Selkirk herd plunges to 24 while BC logs its habitat. Snowmobilers and heli-skiers contribute to the decline of Central Selkirk herd BC Minister refuses new habitat for Deep-snow Mountain Caribou

Thanks to the Edmonton Community Foundation and many other donors

The VWS caribou conservation campaign was funded for 2019 by an anonymous donor through the Edmonton Community Foundation, and by a second funder who wishes to remain anonymous. These donations funded the research and activism noted in the posts below, and much more that cannot be told here: working for the Selkirk Mountain Caribou Park Proposal, monitoring of caribou habitat logging in the field, public education, legal services and more. Fortunately these donations have been renewed for another year. In addition, VWS works with a number of expert biologists who donate services of inestimable value. VWS extends fervent thanks to all the caribou angels who have supported our campaign, including hundreds of small and not-so-small donors.