You are here: Home1 / News Archives2 / News3 / Central Selkirk Herd Plunges To 24 Animales While BC Logs Their Habita...

The Central Selkirk caribou are Deep-snow Caribou that range between Nakusp, New Denver and Kaslo. Environment Canada has declared that all the Southern Mountain Caribou are under imminent threat to their recovery and must have immediate action that includes habitat protection. The Central Selkirk herd was listed as being particularly under threat.

Yet in September 2019, the Minister of Forests, Lands, Natural Resource Operations and Rural Development declared that no Deep-snow Mountain Caribou would have new habitat protection. And it is allowing federally-designated matrix habitat of the Central Selkirk herd to be logged at multiple points around Trout Lake and Duncan Lake. The Duncan Lake operation is clearcutting in the Valhalla Wilderness Society’s Selkirk Mountain Caribou Park Proposal. A $4.8 million dollar road has been pushed within 1-2 kilometres of an area used by the caribou every year. Matrix habitat is supposed to have only limited disturbance, but the photo at right shows what the logging near Duncan Lake is doing.  It has already started a mass failure that could result in a landslide. 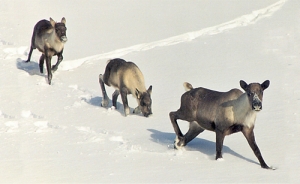 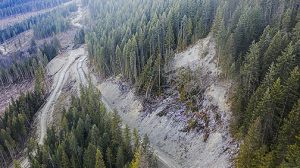 For years BC government biologists have been reporting that the Central Selkirk caribou are abandoning their high-quality winter habitat due to heavy use by snowmobiles, and cat- and heli-skiing. They have been pushed into marginal habitat. This can mean steep slopes with low amounts of lichens they need for food. It can cause poor nutrition, excessive energy expenditure, and reproductive failures in spring: dead cows, stillborn calves, or calves too weak to run from predators. It can also mean increased risk of deaths by avalanches.

Only 2.5% of the Winter Range was protected from snowmobiling

The area that the BC government set aside in 2007 for the Central Selkirk herd, called Caribou Ungulate Winter Range (UWR), was insufficient for their protection and left out known occupied habitat. 97.5% of the Central Selkirk UWR remained open for snowmobiling and cat-skiing, and part of that was on steep slopes tracked by avalanches. Yes — the caribou’s 2.5% included avalanche tracks on Silvercup Ridge while the humans swarmed the gentle slopes with their loud machines! Apparently, the sooner the caribou were gone the better. Meanwhile multiple overlapping heli-skiing tenures cover approximately half of the range of the Central Selkirk herd.

In 2019 the BC government  revoked the meagre 2.5% snowmobile closures. It has replaced them with mobile closures that use transmissions from caribou radio-collars to track the caribou. Essentially, the closures follow the caribou around. In a classic case of doublespeak, the BC government now says that all caribou habitat for the Central Selkirk herd is closed to snowmobiling! But in reality the government has issued “exceptions” to the closure to two local snowmobile clubs. The exceptions open to these clubs any caribou habitat not currently covered by the mobile closures. Anyone who wants to ride in the rest of the area, whether they are from the local area, or from Alberta or the Okanagan, can join the clubs — sweetheart deal for the snowmobile clubs: they can have almost all their riding terrain and gain numerous new members too.  Increasing memberships can (and do) buy snow-grooming machines.  And build huts that attract more and more members. Under the guise of caribou conservation, the government is continuing to foster the growth of the snowmobile industry. There are serious problems with the mobile closures. For instance, they do not solve the problem of displacement from high quality habitat. They may protect the caribou only in low quality habitat to which they’ve been displaced. But there are also some assets to the mobile closures. VWS has launched a proposal to employ both:

that would apply to all winter recreation

Some snowmobilers say they want to save the caribou and they are willing to limit where they ride. The caribou actually need all of their high-quality winter range. But a compromise to expand the closures from 3.3% to 6.5% might make an important difference if it is located in the highest quality winter habitat. Please sign VWS’s petition to give the Central Selkirk herd permanent, stable, expanded winter recreation closures.

Send the petition to Valhalla Wilderness Society/P.O. Box 329/New Denver, BC/V0G1S0. The total proposed, expanded closures shown below constitute 6.5% of the Caribou Winter Range for the Central Selkirk herd. Winter recreationists would have all the rest of the winter range plus areas outside of it. The purple colour on Silvercup Ridge shows open, high-elevation terrain for snowmobilers. 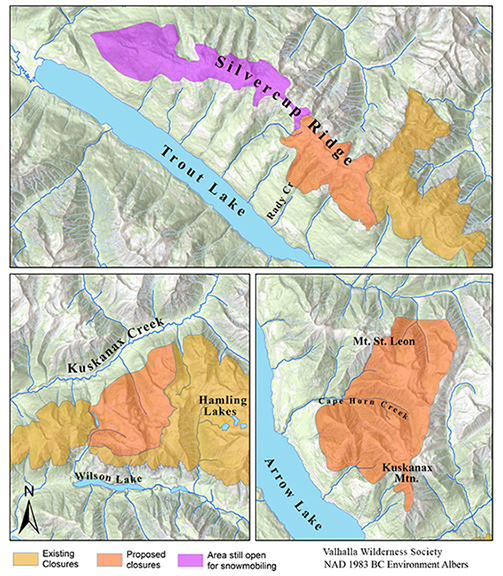