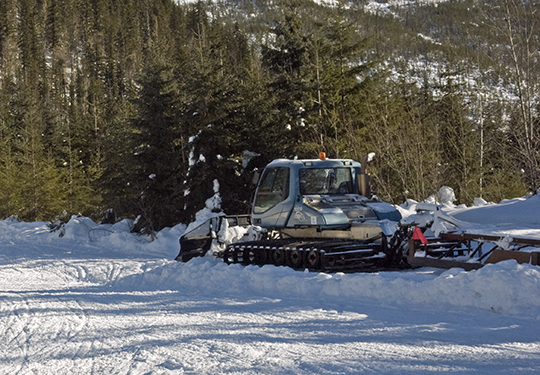 Top government managers of B.C.’s Mountain Caribou Recovery Plan (MCRIP) have reported that the plan is failing to keep snowmobiles out of caribou’s winter habitat, even as caribou herds race towards extinction. In their 2015 briefing report to the MCRIP Progress Board (1), the government managers said that caribou are being displaced from winter feeding grounds by snowmobilers, some of whom are riding in areas legally closed to snowmobiling. The BC Government’s own Mountain Caribou Progress Board has called for voluntary snowmobile closures to become legal closures. But meanwhile the government is allowing a booming industry of groomed snowmobile trails into mountain caribou habitat, where snowmobile clubs are charging $25 per sled to use the trails. And the website of BC’s own Ministry of Environment provides a handy list BC snowmobile dealers and their phone numbers, in case you want a snowmobile to ride in mountain caribou habitat: a chilling example of the government’s double-faced policies, in claiming such concern for saving caribou as to require shooting wolves from helicopters, yet ignoring the packed-snow highways that snowmobiles make for wolves and cougars to have easy access to caribou in winter.